I just returned from a trip into my past or more accurately my Mother’s past.  A visit with cousins in Louisiana led to a trip down some back roads in Washington Parish which led to a remote Baptist church and a small cemetery and a surprise.

Mother says I’ve been to the cemetery before, but I have no recollection of that.  My great grandparents and some of their siblings and children are buried there, and I amazed my family by locating the cemetery on the internet via my iPhone and accessing a website that actually listed all of the people buried there.
There are thousands of such cemeteries accessible to varying degrees via country roads in every county and state in North America. This particular cemetery, Sunny Hill, is maintained by the descendents of another family whose name appears on many of the headstones. The sad truth is that too many small family cemeteries are not maintained and thus likely to be overgrown and lost forever.

Does it matter if they are lost or found?  Maybe not.  I suppose I’m interested in such things because of my love of history and dabbling in genealogy, but there was something compelling about standing in the yard between that cemetery and the small white country church that my Mother remembered attending as a child. [She says it used to be a lot bigger church back then!]

As we stood there she started talking again about the Sunny Hill community of her childhood, pointing out where the Methodist church and the general store used to be, where the school she attended was located.  She reminisced about walking to school for one year, first grade, because her Daddy wanted her to go to the school he went to when he was growing up.  Funny thing was that he made Mother’s little sister accompany her on the one mile walk, so my Aunt Pansy sat through first grade that year and then had to go the next year too.  Oh, and by the way, I’m not sure what a five year old could have done to protect a six year old had something bad happened to them on the way to school. But those were different times.

We had piled in the car to begin our trip back to the present, but the past wasn’t through with us yet.  As Mother pointed to a wooded area across the road from the church and told us, “The school was right there,” my cousin said, “I see something.  It looks like a shack.”  Sure enough we got out of the car and peering into the woods could just make out the building, or what was left of it. 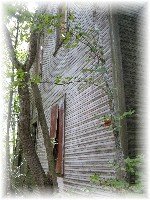 Just as my cousin was promising to come back and explore the area later, we discovered a path that was more or less clear so we all traipsed into the woods, right up to the dilapidated two story structure where my grandfather had gone to school and played basketball, and where my Mother had attended first grade.

There wasn’t much left there to see, but there was a broad staircase, walls, parts of the floor and the roof, and somehow I had no trouble picturing my Mother there.

For good or ill, the past lives and is always part of our present.  For me, it is all good.  I think John Denver said/sang it best: “Country roads take me home . . . “
Posted by RueMom at 6:55 AM No comments:
Labels: cemetaries, family, History

Not sure what to do with what I’m thinking and feeling right now – except to write it down and puzzle it out.
So, I [we] decided to leave the Methodist Church and become Baptist, and I thought I knew what that meant.  Although I’ve never been a Baptist, I thought I had a pretty good idea of what a Baptist was.I think what I’m finding out is that there are many different kinds of Baptists and many different kinds of Baptist Churches.

The good thing is that, unlike the Methodist Church, I can join a Baptist Church and not have to support some advocacy group that does not speak for me…at least I think that is possible.  I am still learning about the Baptist Church, Baptist beliefs, etc.But here is an example of something that is kind of troubling me and that is making me feel woefully uneducated – the local Baptist Church that we have chosen to attend is participating in a study called “Monvee”.  It is loosely (?) based on a book by John Ortberg,  The Me I Want to Be: Becoming God's Best Version of You”.

Now I’ve known of John Ortberg for decades, though I can’t remember if I’ve read any of his books.   The title of this book is intriguing though and certainly speaks to me – someone who is seeking to hear God’s voice and discern God’s will for my life.  And yet, when I do a little research, I find that there are some Christians who have a few problems with John Ortberg, with his writings and associations and with Monvee itself.  These critics categorize Ortberg, Monvee, et. al. as part of the “spiritual formation” movement or the emergent church movement within evangelicalism.  For the moment, I’m suspending judgment on this particular issue.Another influence within the Baptist Church is Calvinism and there are churches that even use the term Reformed Baptists.  I really don’t know what to do with this.  I have recently learned that a new “movement” -  the 9Marks movement is Calvinistic and apparently there are a number of Baptist Churches that are choosing to self-identify as “9Marks Churches” – including one local church that I’m aware of, Mt. Vernon Baptist Church.

Bottom line, we still have some talking to do about what kind of church we want to be a part of, what we want to hear from our minister and teachers on a weekly basis.  If you have any insights, pass them along and stay tuned . . .
Posted by RueMom at 10:54 PM No comments:
Labels: Baptist, Church, Methodist, Monvee
Newer Posts Older Posts Home
Subscribe to: Posts (Atom)